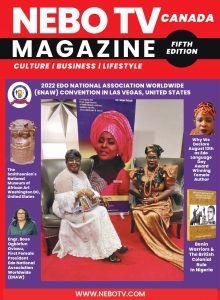 Do you want to know some powerful Edo women? The fourth edition of NEBO TV Magazine featured 50 influential Edo women who have carved a niche for themselves in the public sphere!

We are very delighted to introduce our second edition of the NEBO TV Magazine to everyone! The magazine is featuring some inspirational Nigerians in Canada and United States. To download the digital copy of the magazine click on this link, https://fatfreecartpro.com/l/3EYgFOUc?s

We published the first edition of our stunningly beautiful Magazine! The hard copies will be available in different parts of the world.